During our walks along long distance paths in England, we’ve often merged with or crossed The Monarch’s Way and eventually, we decided to discover more about this path, which appeared in so many places.

I’m sure that at some time in my schooldays I studied the Civil War and the flight of Charles II from England, but I regret that I am woefully ignorant of the period. Following a little research (if ploughing through a rather tedious Georgette Heyer novel counts as research), I now know that after a heavy defeat at The Battle of Worcester 1651 and with a price on his head, Charles II spent six weeks hotly pursued by Oliver Cromwell’s Parliamentary forces as he tried to escape to France. His journey was circuitous as he first headed north, then doubled back down to the south coast and finally across the downs to Shoreham and The Monarch’s Way is a 615 mile footpath based on this escape. 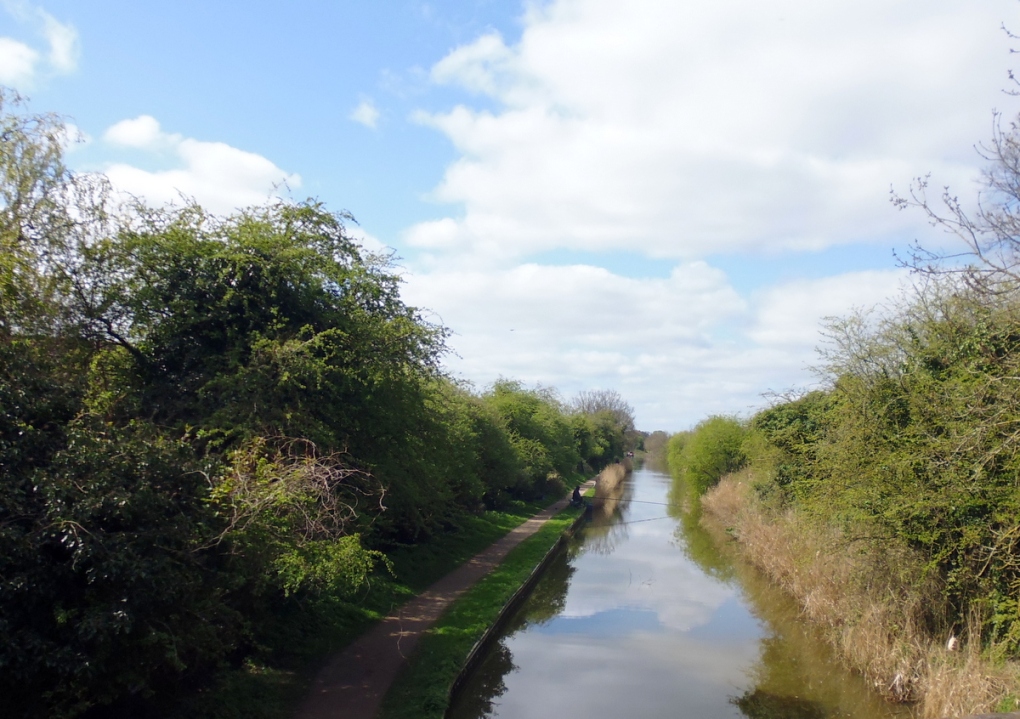 We thought this walk would keep us busy for a while, so made a start earlier this month. We walked from Old Powick Bridge, just south of Worcester, in glorious April sunshine along the banks of the Rivers Teme and Severn into the hustle and bustle of the city and then headed northwards along the towpath of the Worcester and Birmingham Canal, which was busy with boats, fishermen, cyclists and dog walkers. We watched the fisherman, sat firmly on their stools with their copious paraphernalia spread within arms’ reach, as they picked bait from their varied selection and then used a catapult to send it flying to the other side of the canal where their line dipped into the water. I was hoping they might mistake their packed lunch for bait and catapult a sandwich across the water or pop a maggot in their mouth but it didn’t happen. Fishing remains a great mystery to me. Leaving that canal and skirting a rather unlovely industrial area we returned to the countryside and finally walked along the towpath of the sleepy Droitwich canal into Droitwich Spa.

The following day we headed out across the fields, past the impressive Westwood House, around numerous fishing lakes, had a chat with a man about ducks as we tried to find our way out of a nature reserve, followed the footpath from the road through a gate in the wall into a private garden where it ran for about ten metres and then emerged back onto the road (which was very strange), across a point-to-point course where they were putting up the rails for the forthcoming races, past a beautifully kept community orchard and into the village of Chaddesley Corbett. For once, our timing was perfect as we arrived bang on lunch time and the pub was open; normally we arrive too early, too late or the pub is shut. After a swift lunch (we were the only customers) we headed off through more green countryside, up and along a ridge with views across Worcestershire and to the West Midlands and finally into Hagley. An enjoyable start to The Monarch’s Way.

Next time we walk the path, we have a dilemma. The first two days were ideal for us – walking through villages and beautiful countryside, exploring a small city and both days there was a railway station conveniently close to the start and finish. The next few sections of the trail are less appealing as they include miles of urban pavement walking, a long stretch of rural road walking and an area with no regular public transport. We are walking for pleasure, not through a desire to retrace the royal escape route nor to tick off a completed long distance trail, so I think we will probably skip a chunk of the trail. It feels a little like cheating but I can’t see the point of walking where I don’t want to be when there are so many places that I do want to explore.

Would you grit your teeth and do the whole thing properly or would you ignore the official trail and walk your own shortened route?