It’s been a good year for blackberries here at Slamseys Farm. Each year I follow the ripening of the bushes around the fields, starting in early August with the first small bush in Great Forest Field to the last weeks of September when I walk to the far end of the farm to the thicket in the corner of Gardeners Field to pick the dark, purple coloured berries.

According to British folklore, Old Michaelmas Day on 10th October is the last day that blackberries should be picked as that’s the day the devil spits on them. Whether you believe that or not, by now the blackberries are coming to an end and although there are still plenty of unripe berries, many of the ripe berries are too soft to pick.

As a consequence, we’ve been making the most of the last blackberries. Beth only picks blackberries for her gin when they’re at their best, which means that anything I pick in October is for me!

As well as a last flurry of making blackberry puddings and cakes, the pantry is now stocked with bottles of Blackberry Vinegar. I add a dash of Blackberry Vinegar to gravy when it needs a bit of a buck up, slosh a little over roasted vegetables for the last five minutes of cooking to make a glaze or use it in salad dressings. Diluted with soda water, Blackberry Vinegar makes a surprisingly refreshing long drink, being less sweet and cloying than some cordials. In winter I dilute Blackberry Vinegar with an equal measure of boiling water and drink it when I have a sore throat when the rasp of the vinegar on the back of my throat seems to override the pain. Strangely, the rest of the family prefer medicated throat lozenges instead.

Another batch of blackberries went into the dyepot with the berries simmered in water for an hour and then left to stand overnight. Next day the blackberries were strained out leaving a gorgeous deep purple liquid to which I added alum mordanted wool and simmered for 50 minutes, resulting in a dusky plum coloured yarn. Interestingly (well, I think it’s interesting) I put one hank of yarn into a jar with a little of the dye and added wood ash water (read how to make it here ) and the wool changed to a green brown colour. I don’t think these wools will be very light fast, so it will be interesting to see what colours they fade to.

In this sample I also used leaves and coins, which makes an interesting pattern, though I prefer the pure blackberry sample. 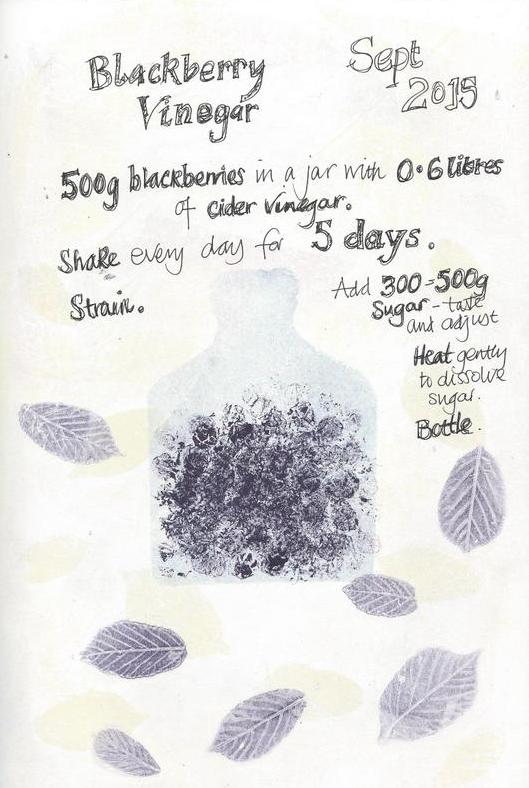 Last of all, I couldn’t resist a little jelly printing with the leaves. Ruth and I are thinking of running a Blackberry Day in The Barley Barn next September, incorporating some or all of these processes, which might be fun. I think we shall have to include a taste of Slamseys Blackberry Gin somehow. Perhaps we could finish with a Blackberry Cocktail. I must start working on that one now.

11 thoughts on “the last blackberries”