There may be various ways of working out the start of autumn, whether you use the Met Office or astronomical dates or veer towards phenology, guided by the changes in the natural world such as the colouring of leaves and ripening of acorns, but sometimes it’s more personal. Here’s five ways I know that autumn is here.

ONE The countryside is changing colour. From the brown fields where the ground has been cultivated ready for sowing the new wheat crop to the leaves on the trees that are slowly turning yellow, brown and orange.

TWO  I feel drawn to wearing browns and purples. This happens every autumn as catalogues drop unbidden through the letter box featuring leggy models photographed in misty orchards wearing felt hats, tweed trousers and brogues. I resist the urge to emulate them as (a) brown and purple don’t particularly suit me and (b) my legs are at least 30 centimetres too short to carry off the look without appearing to be in fancy dress for a war-time drama. 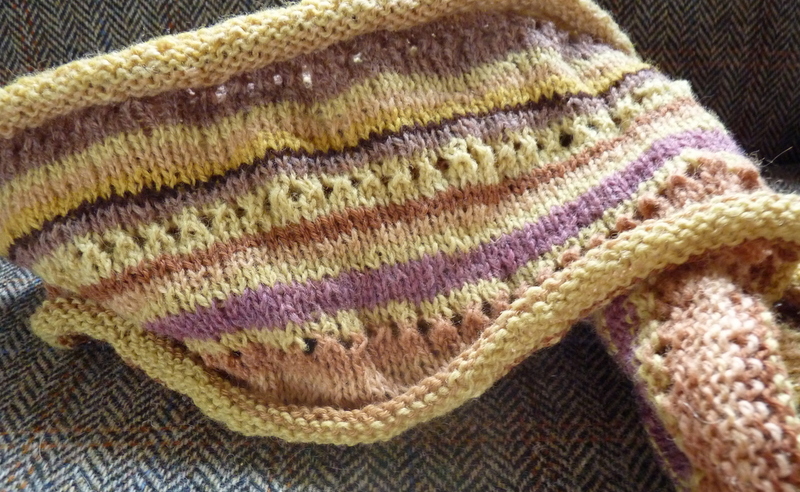 THREE  I start knitting. I thought it would be good to knit a neck warmer using the wool that I dyed with plants gathered from around the garden and farm. A sort of knitted story rather like the printed book I made in the spring. It would have been better if I’d worked out how long to make it rather than just cast on stitches until I got fed up (it winds around my neck three times and there’s still a lot of slack). Having decided to knit in the round, it would also have been better if I’d untwisted at Row 3 when I realised my error instead of thinking it wouldn’t matter. Actually, by the time it’s wound around and around, it doesn’t show. Not too much anyway. And yes, it does appear to contain brown and purple.

FOUR The Autumn Menu for The Dinner Party Collective is published. There are recipes for Vegetable Dips, Boeuf Bourguignon and Blackberry Tart together with suggestions for wines to accompany them. Just the thing for evenings around the table with friends. Nothing pretentious or fussy, just good autumn food.

FIVE  The kitchen reeks of vinegar or sugary fruit as saucepans filled with chutneys and jams boil away on the cooker. I know that I do not need to lay in stores for the winter like the squirrels that I watch pilfering our walnuts from the tree. For goodness sake, I live half a mile from a supermarket that’s open twenty-four hours a day. But there seems to be some sort of primitive urge to stock the pantry shelves for the winter and anyway, I always plant more tomatoes than we can eat fresh and  I cannot bear to see the fruit fall from the trees to lie rotting on the ground. And I can’t walk past blackberry bushes day after day without stopping to pick a few to drop into an apple crumble. And a few to make jam. And a whole lot more for Blackberry Gin. And blackberry chutney. And blackberry leather …

How do you know that Autumn has arrived? Or maybe you don’t notice or even care. Do tell.