Do you worry that everything is digital nowadays and wonder if future generations will have something to hold in their hands that we touched? Everything seems to be on-screen now. Handwritten letters are rare, postcards almost non-existent and official documents are filed online.

When Bill went travelling he diligently wrote a letter to his parents once a month or thereabouts, all of which his mother kept to hand back to him when he arrived home and occasionally he flicks through them and revives a distant memory. Now, our children update us from far flung places by Facebook, which is instant but fleeting and will doubtless float off in the ether, lost to us all. Photos are stored on computers that crash or on free cloud storage with no guarantee of permanency and I have a pile of cine film, VHS tapes, cassette tapes and floppy disks loaded with memories but now unreadable.

I was pondering all this as I replaced some of the way mark discs (for the public footpaths and bridleways) around the farm that have faded or mysteriously disappeared.  I went past the flowering violets, primroses and cowslips and lichen on bare branches along a track that has been walked for hundreds of years and wondered how many people had walked along and noticed the same things, watched the seasons roll past and trees grow from tiny acorns to spreading oak trees. Almost imperceptible daily changes that we take for granted and yet add up to massive change over the years. So, of course we don’t mark or record it and the memory of how it used to be disappears.

On the way I stuffed a few bits and pieces in my pockets – leaves, feathers and flowers (though I ate the violets) and used them to make jelly prints that I folded into little books as a permanent memory. 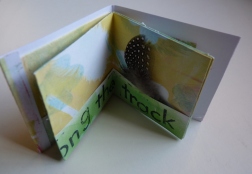 One of them is a snake book, which unfolds rather like a walk and the other has pockets in which to tuck collected things or perhaps photographs (if I get them printed) and an unfolding narrative of the walk in the back.

An evening spent in frivolous creativeness. Because sometimes it’s good to have something to hold. A reminder of how it is today, because it’s bound to change in the future. Though obviously only for me because my children will almost certainly throw them out, which I completely understand (I would do the same).

How do you store your experiences and memories for future generations? Does it really matter?

36 thoughts on “something to hold”