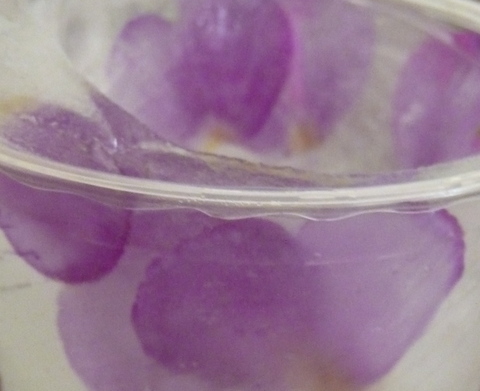 Years ago, I saw a picture in a magazine of a beautiful bowl made from flowers and leaves encased in ice. But beautiful as it was, it seemed fairly unusable. Surely it would melt too quickly leaving a soggy mess. Then I found pictures of ethereal ice glasses with delicate flowers suspended in a ghostly sheath, but I thought if the ice was too thin they’d leak and supposing they were so cold that your lips stuck to the ice. Ouch. Instead, I made ice cubes with flowers in them and with raspberries or thin strips of lemon peel but still the idea of ice bowls and glasses hovered.

Of course in the end, as spring flowers start to appear along with thoughts of languorous summer days ahead, I had to try making ice glasses. I put a little water into the bottom of a glass and froze it, to make the base. Then I put a slightly smaller glass inside, poked flowers down the sides, filled the gap with water and froze again before releasing the glasses with hot water to leave an ice shaped glass. But they’re very slippery and very cold and hopelessly impractical.

Using plastic glasses might work for a small party if the outer plastic glass was left in place to make it more comfortable to hold. They could be made well in advance, would look pretty and drinks would be ready iced.

Far more practical though is a decorated ice block. To quote Dorcas Lane, my one weakness is … a gin and tonic before Sunday dinner. I’m fussy though.  I have preferences for certain gins and don’t like flat or diet tonic water. Most importantly, a good gin and tonic needs plenty of ice. My father in law didn’t add ice because he thought it diluted the drink and when I once asked my mother in law if she had some ice, she thought someone had sprained something and I was looking for an ice pack. But use plenty of ice and drink fast enough and dilution isn’t a problem.  A silicone fairy cake mould is ideal for making a good sized ice block (or hot chocolate block) and a much better use for these wretched things than baking when they twist and bulge and produce odd shaped cakes. A flower or slice of lemon dropped into the water makes them look decorative and as they’re large, the blocks take ages to melt. Altogether more practical than an ice glass, though not quite so beautiful or fragile looking.